Learn about one of Minnesota’s oldest Episcopal churches.

The Early History of Christ Church of Old Frontenac 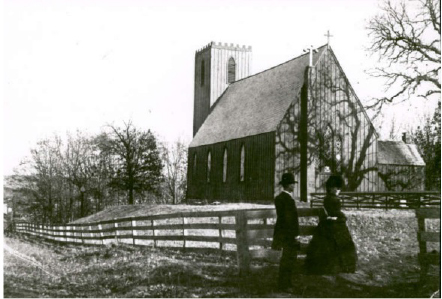 In this c.1880 picture, the fence nearest the church (right of the lady) has the Clifton design and cross boards in the upper half. The chimney has a unique pipe set on top to provide better draw for the stove and to eliminate rain water intrusion. The cross is a dominant feature at the peak of the roof. “19th Century Frontenac, Minnesota – the Rest of the Story” 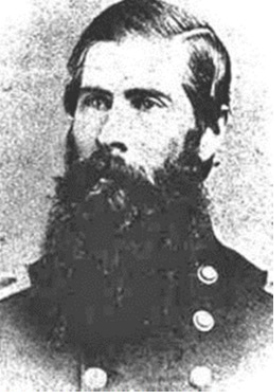 The history of Christ Church begins as early as the history of Frontenac, Minnesota itself. In 1859, Reverend E. R. Welles arranged for the first services of the Episcopal denomination to be held in the homes of local parishioners. In 1861 the Rev. C. P. Dorsett, who had been ordained as a Deacon in 1860, established his home in Frontenac.

The Deacon conducted services in what was then the school house located not far south from the site of this church. Christ Church was built through the efforts and generous contributions of General Nathaniel Collins McLean.

After the Civil War, McLean took up residence in Frontenac. He was eager to see a church established and worked vigorously toward that end. Ground was broken for the foundation of Christ Church and building of the structure started in 1867. A carpenter and cabinet maker, Henry Hunecke, was in charge of building operations.

Lumber for the church was brought from Stillwater by steamboat via the St. Croix and Mississippi Rivers. On the day the lumber arrived, General McLean devoted an entire page in his diary to this event, observing among other things, that the wood was “well-seasoned and most suitable.” At the bottom of the page, after several paragraphs about the lumber, the General made this entry: “Last night my wife gave birth to a baby girl.”

While Christ Church was under construction, a wind storm demolished part of the building. Permanent braces were subsequently added to strengthen the structure and construction of the building continued. The braces were only recently removed when the latest renovation made it structurally sound. Christ Church edifice was completed at a cost of $4,000 in 1868. It was consecrated on October 27th of that year by Bishop Whipple. 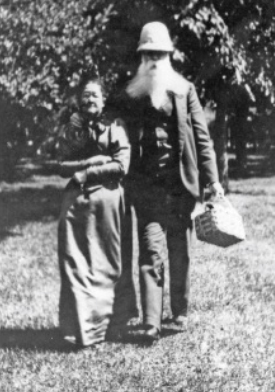 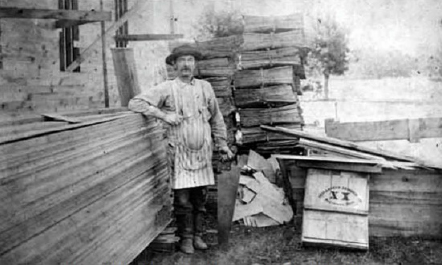 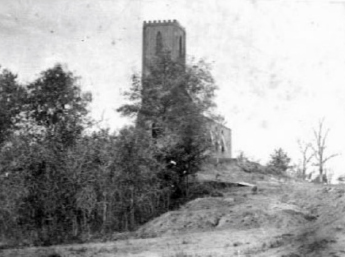 The furniture in the church is presumed to be handmade, probably by Henry Hunecke, who came to Frontenac in 1859 to work as a carpenter and cabinetmaker. The pine cupboard in the sacristy had all the characteristics of Mr. Hunecke’s workmanship. The lectern, prayer desk and credence table with their detail of design and the antique deacon benches helped to create an impressive atmosphere within the church. The original altar was replaced and has been restored to the original altar’s design with the 2018 renovations.

The church was originally lighted by kerosene lamp and, later, by gas lights. Electric lights resembling the bracket-type kerosene lamps were installed in 1932. In 1966 a gas furnace was put in to replace the coal-burner. The church was rewired in 1992.

On the wall in the church’s chancel are the following words: Glory To God In The Highest And On Earth Peace Goodwill Toward Men. On the archway it says: For Unto Us Is Born This Day In The City Of David A Savior Which Is Christ The Lord. These scriptural passages, with letters cut from window shades, have been in place since installation by General McLean and his helpers for a Christmas program sometime in the late 1800’s.

Seen on the church chancel: Glory To God In The Highest And On Earth Peace Goodwill Toward Men.

On the archway it says: For Unto Us Is Born This Day In The City Of David A Savior Which Is Christ The Lord.

These scriptural passages, with letters cut from window shades, have been in place since installation by General McLean and his helpers for a Christmas program sometime in the late 1800s. 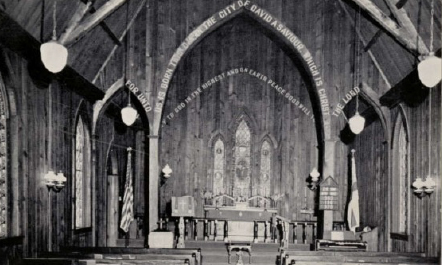 Early Photograph of the inside of Christ Church Old Frontenac

When the services of a priest were not available, General McLean conducted services as a lay reader. He also maintained a Sunday School. The family lived in Frontenac until 1885 then moved to Bellport, Long Island, New York where he helped establish another Episcopal church.

In the rear of the church hangs a beautiful oil painting which is a copy of the Madonna with standing Christ Child by Murillo. This was a gift to Christ Church from descendants of the McLean family.

After the departure of the McLeans, the work of the church was carried on by faithful members, among them Evert Westervelt, who served as a lay reader, and his wife, Julia. His daughter “Miss Mary” taught Sunday School and played the old black walnut Mason and Hamlin organ, which had to be pumped by hand by members of the congregation.

The Restoration of Christ Church of Old Frontenac

The restoration occurred in manageable and fundable phases from 2011 through 2018 thanks to generous donations from members, past and present, along with many donations from community members. 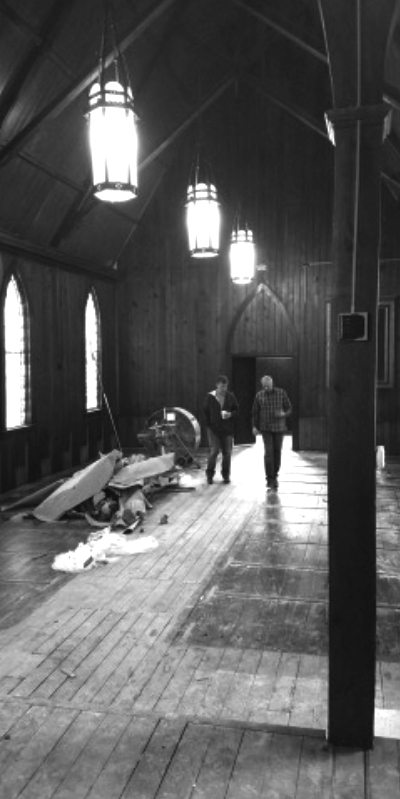 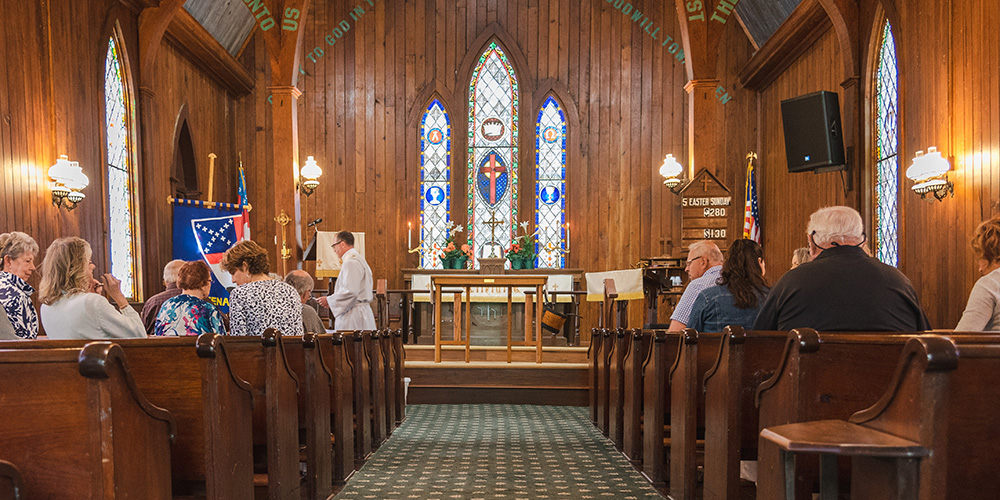 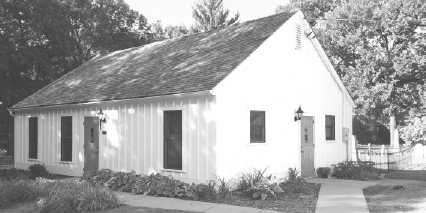 The parish hall was constructed in 1993 to provide a heated gathering site with a toilet facility and a kitchen. The addition of water and indoor plumbing plus a gathering area was a huge event for the church. It would not have been possible without a generous gift from the John and Mary Engelbert family in honor of their son Stephen Engelbert.

Until then, an outhouse was conveniently located near the church side entrance for attendees to use. It still sits near the cemetery to remind us all to be thankful for modern conveniences!

We are grateful that our historic church renovation was made possible by all of our member volunteers, especially Kerby Rigelman, whose expertise and countless hours of hard work will be forever remembered and appreciated by all.

Join our email list for the latest news on upcoming events and updates from Christ Church. Rest assured, your information is confidential and will not be shared with spam lists.

Christ Episcopal Church of Frontenac gladly welcomes new members. Contact us today to learn more about our membership process and the many service opportunities available.